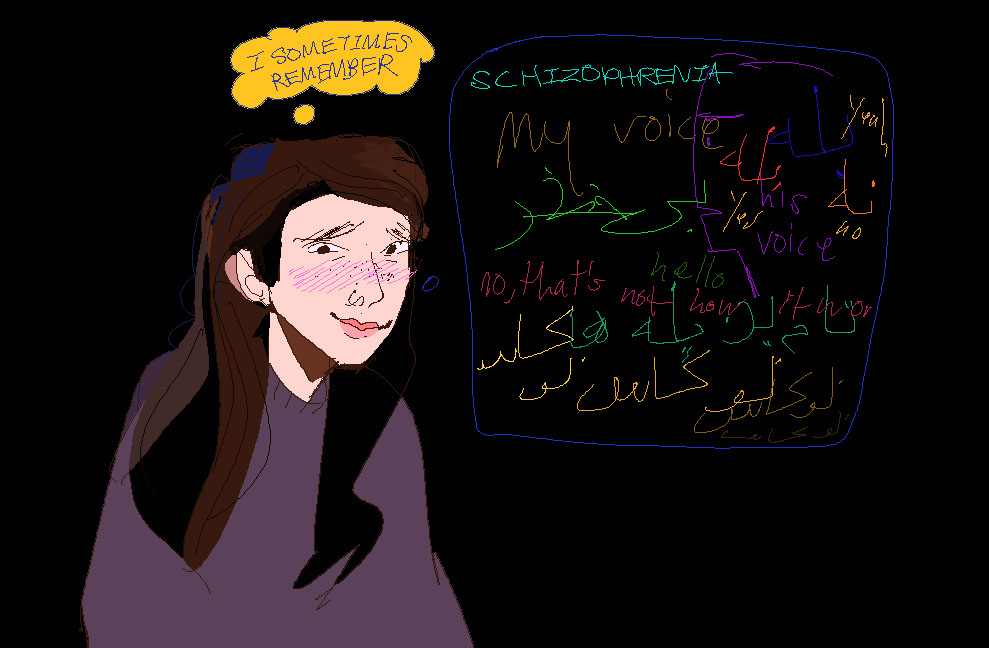 remember the time you told him to talk to you in Farsi?

you guys would listen to C418 like it the was gospel

now all you guys do is sleep in bed and cuddle

its the same sort of feeling though.

in the not so far past in 2014ish to early to mid 2015ish ,my first ever serious character/oc whatever you'd call him was being made. His name was Lukas Petrov! And he was really edgy.

Sporting a beard and a love for satanic symbols, Lukas originally was the more dominant one in his relationship with Gul (or Gül as it originally was). 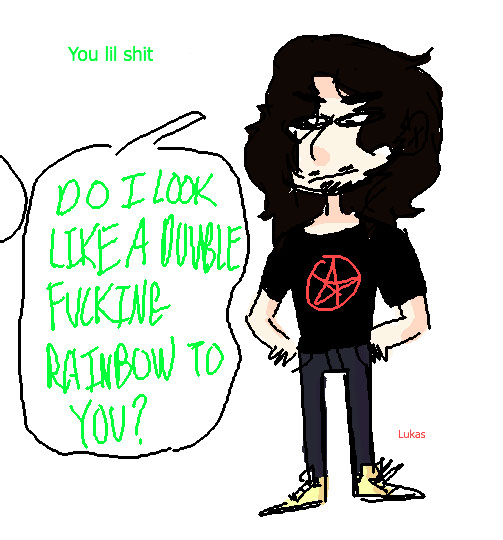 I was inspired by different niche music genres for my characters originally. Lukas was a witch house loving edge lord and Gul made PC-Music. Trolling the le epic XD fourms with his now cancelled and defunct friend, Jaxxson.

sorry to side track but yeah. Looking back lots of art with him was much more tame,

but slowly like a demon making its way through your childhood home, art got more violent and sinister by the time he had developed into a full fledged character. To anyone else it looked more like cringey middle schooler art but to me I was starting to have a serious case of depression.

Lukas was now self destructive, even paranoid. Self harm scars all over him. Cutting himself in most art he was drawn in or something else just as negative. And all Gul was at this point was a vessel that would ground him or in some cases the bad guy.

Was he actually a terrible partner? Or was it Lukas' paranoia? Schizophrenia would quickly find its way to Lukas. I did a lot of research into the illness and my heart to this day goes out to anyone affected by it. At the time I did not realize I was venting through art. I didnt just lie to the world saying I was ok. I seriously believed myself when I thought I was fine.

The older I got to this day, Lukas became a much more realistic person. I changed his race (which is really rare for me) and he became much more honest for me. Yes he self harms a lot but now he was the docile one. Timid and anxious. Instead of him facing this issue alone he has Gul to be there for him. This point in my life I was actually the most self destrutive. I had constant almost fearful thoughts of self harming, but this time I needed to be more positive.

My art from this period was a bit more self reflective and now Lukas had true scars. He actually has thoughts about relapsing and how his future looks. Getting a service dog for his anxiety is a serious possibility now and Gul is there as always, protecting him and loving him despite all these faults.

This point in time in my life also yielded extremely vivid day dreams. I had no clue I was somewhat  doing a vague version of maladaptive daydreaming I think as a way to cope with extreme stress, I protected my self by daydreaming with characters. Maybe it's why Gul became such an extreme protector??? idk. Its weird because they felt so real.

Now Lukas was more real and less cartoony, schizophrenia seemed to fit him as now at this point i hallucinated twice and he seemed like he still had it but.. did he? I needed to be real with myself and honestly... I had to let it go and keep it in the past.

I image him in the header art above from 2018 with a clouded mind full of thoughts and voices. Memories of Gul's sweet Persian but there's still the lingering threat of other intrusive voices. Lukas can't always remember things very clearly and he wants to remember the sweet tones of his lover but can't focus sometimes. It's a terrible revelation he has.

My other character Kristlen who ends up becoming a very dear close friend of Lukas has schizophrenia now, and fits her. And I'm just fine with that. She's not as self destructive, at least to others and she's very smart. She deserves to be happy with her partner, Pomona and no one else needs to always know.