Nishi Majumdar, despite being the daughter of a somewhat well known politican, has always been sidelined.  Spending many hours on her computer playing minecraft away from her family, or simply staying quiet. Too timid and nervous to speak

She was studying and learning court stenography in school before she had suddenly disappeared.

To everyones surprise, she had left to join ISIS.

She had been talking to a man named Aamil who was responsible for recruiting her. Radicalizing her and enticing her by sending her boxes of chocolates, books,hijabs, and even money.

She eventually does marry a man named Monzer while in Syria and does try escaping and succeeds. Her only other friend is a man named Faisel and a young kid she takes care of.

All of this information about her situation in Syria is unknown to her family, and her whereabouts are unknown to the public. 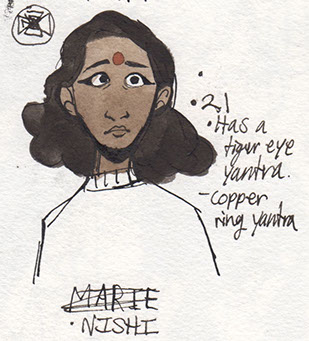